Approximately one hour east of Tambolaka airport, you can find the Renewable Energy Kiosk, Yofi Mayu Delo. Sitting down in front the kiosk, Mama Margaretha, a 44-year old mother of four, winces as she recalls her life journey.

“My parents, and especially my father, did not give his blessing when I got married. Because my husband was working as a mason, I think my dad thought that I would suffer”, she says.

And in fact, Mama Margaretha did experience several challenges from the early stages in her marriage. Mama Margaretha is from the island of Sumba, where women are largely defined by marriage, reproduction and domestic work. Sumbanese women are not found in political leadership and have little or no say in clan decision-making. As a result, asserting their thoughts in front men and the larger public is seen as impolite and as breaking the norm.

Because of Sumba’s patrilineal clans, Mama Margaretha was unable to help her husband generate income, even though she wanted to. In addition, Mama Margaretha also became subject to domestic violence. After 11 years of despair and suffering in her marriage life, an accident happened to her husband that changed her whole life. Gradually, his aggressive and violent behaviour disappeared in their daily lives. 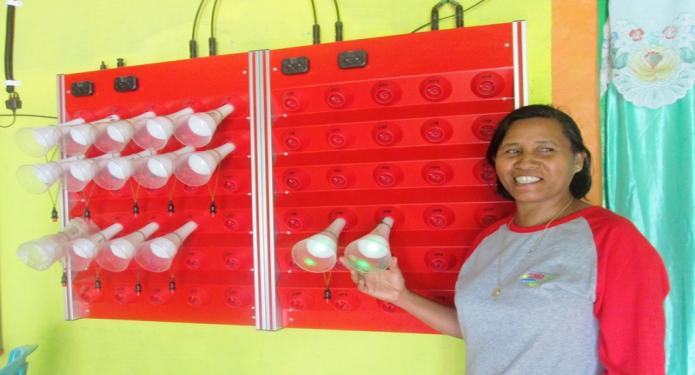 “I think the accident was a blessing in disguise”, Mama Margaretha admits. “My domestic life got better. As my husband couldn’t work anymore, we decided to build a small grocery kiosk in 2006 to have additional income for my family.”

Ten years later, Hivos chose Mama Margaretha’s Kiosk as one of TERANG[1] Renewable Energy Kiosks[2]. In addition to selling groceries, the kiosk began recharging solar panels and has become a gathering place for people to spend time with their neighbours and watch television together. The kiosk is also open longer, which has increased the number of customers overall. Mama Margaretha has decided not to increase her prices unlike other kiosks and even then, she makes EUR1200 every month.

“I applied for a small business credit from Bank Rakyat Indonesia of IDR1500, which had to be repaid within two years. Luckily, the kiosk is now busier than ever, and instead of repaying the loan in two years, I can do it in just a year.”

Mama Margaretha’s patience and persistency teaches us a valuable lesson. When women are allowed access to resources and greater participation in civil society, they can improve the livelihood of their communities, especially in rural areas. Today, Mama Margaretha is more confident and holds an important role in her family. While expanding her business, she is thinking about how to bring light to her village.

“People here are big fans of solar lanterns”, she says, acknowledging the way solar products can improve people’s lives. “I want to keep helping and empowering people in my village in any way that I can.”

[1] TERANG is a combination of two iconic programmes of Hivos, the Sumba Iconic Island initiative and the Indonesian Domestic Biogas Programme. TERANG project is a partnership between Hivos Consortium together with Yayasan Rumah Energi (YRE) and Village Infrastructure Angel (VIA) with Millennium Challenge Account – Indonesia (MCA-I) for the period of December 2015 until March 2018.

[2] Renewable Energy Kiosk has 0.3 kW PV that will charge solar lanterns and hand phones. The kiosk leases out or sells 1,000 lanterns. This activity aims to address these issues and increase access to lighting and electricity for charging cell phones to improve the livelihoods of 5,000 individuals.